This journal is currently friends only, with the exception of old polls.

If you'd like to be LJ-friends, please a leave a comment explaining who you are and all that jazz. I don't have any strict requirements when it comes to adding people, but at the same time, I don't feel obligated to keep someone on my flist if there's absolutely no connection or communication going on.

For the most part, though, I'm very happy to make and keep new (internet) friends. :)

I also have an introduction post (friends-locked) that explains all the basics things you might want to know if you're reading this.

Just got back from a small Christmas trip to see various members of Anders's family while staying at his mom's house. A ridiculous amount of food was eaten, a ridiculous amount of drinks were drunk, and lots of gifting went on. Though I came home to a very lovely surprise gift too - Anna aka

hamsterwoman had messaged me because she "saw something" that made me think of me, but I guess her awesomeness and generosity overpowered her because an epic package ensued!

Thanks so much, Anna - this was a lovely surprise to see after a tough year and your friendship is forever appreciated. <333

Unrelated, a big thank you to

vettenisse for the lovely holiday card! Hope all is well with everyone and best wishes for a great 2019!

So thanks to the wonders of

ikel89's annual santa exchange, I just received a holiday gift from a "secret" santa. The packages from this tradition are always delightful, but this time my friend Anna (

hamsterwoman) went to santa-extremes. To be "fair" about half of these gifts count as birthday presents for my January birthday instead of holiday gifts, but it's still utterly overwhelming (in a good way, of course). 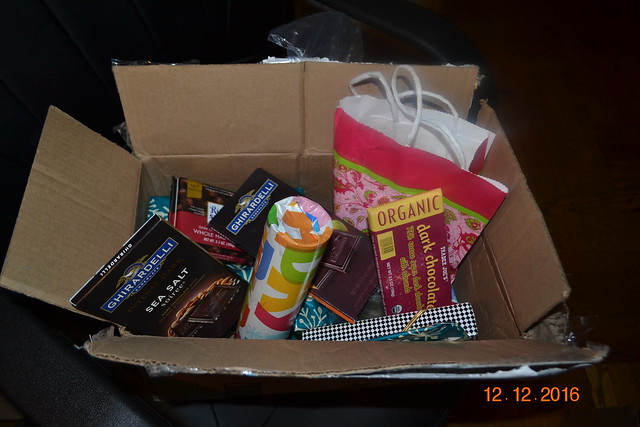 It arrived on Monday, but it arrived quite late so I didn't even finish opening all of it until the following day!

In conclusion, Anna's level of generosity and good taste is too high for this world. Thank you again for bringing something sweet and happy to my December and my 2016. You're the best. And apparently my soulmate. ;)

This week I received the gift package from

polnaya_lipa, all the way from Russia.

In any case, it's been a really tough week with the foot surgery recovery and what seem to be hundreds of tasks to do at school, so this was a sweet treat amidst the negative. Thanks so much for your generosity,

So after the first post back in March, I am finally up to making some kind of update in

After the first update a million years ago, the next book I read was Witches Abroad by Terry Pratchett. It was a good time, though the main feeling that stuck with me was serious amusement at Nanny Ogg and her "wordly" ways/vocabulary. This book satisfies the "book given to you as a gift" square (thank you,

Next was The Good Nurse by Charles Graeber, which satisfied one of the "non-fiction" squares (since the same square shows up in each one I feel the need to use a separate book to satisfy each one). This book detailed the turn of nurse/serial killer Charles Cullen and somehow managed to make this horrific tale boring as can be with the blandest journalistic writing possible. A big disappointment.

I breezed through Girl on the Train, which satisfied the square for "female protagonist" (I know Witches books do, too, but this had one clear protagonist). I enjoyed the perspectives in this book a lot, especially the titular girl's. I found it quite the addicting read. This can also count as the second "author you've never read" square because I'd never heard of Paula Hawkins before this. Oh, and it counts as "continent you've never been to", as well, as it's set in England (so, Europe).

Then it was back to Pratchett, with Lords and Ladies. As promised, this increased my fondness for Magrat exponentially. Though I was shocked to find her major turning point in the story was not somehow Granny's doing. As always with Discworld, it was a lighthearted and amusing time but unfortunately books of that nature don't stay in my memory too well and at this point the main things I recall are Magrat's queen outfit and Pratchett's very creepy version of fairies.

For a book heavily featuring food, I happily recommend Gulp: Adventures on the Alimentary Canal by Mary Roach. She is one of my favorites, always. This book, like all her others, is a humor-filled adventure with lots of information you never knew you needed to know. In terms of food, some interesting things I remember reading include the point of history when chewing was all the rage (this one "scientist" encouraged folks to chew each piece of food 100+ times), the nutrition of organ meat (and its stigma), and the human being's disgust with saliva (e.g., how you won't eat a piece of food you already chewed and then spit out, since, you know, it's gross as hell). And I am somehow just now remembering that this is non-fiction, too - it almost feels like it's a magical story with her, hahah. Will have to cross out that other non-fiction square before the next update.

Then I borrowed The First Fifteen Lives of Harry August by Clarie North from Anders. Loved it. I love the whole concept of a person enduring entire lives as if they were decades-long Groundhog Days, changing choices each time he is born again. I completely believed Harry's reactions to the various lives (e.g., thinking he was mad in his second life when he was old enough to realize what was going on, spending one life studying all religions looking for answers, spending another life studying all of science to do the same, etc.). I liked Harry, too, though I found the antagonist of the story to be less than compelling. No other characters were dealt with in serious depth, but I understand the reason for that, as they are small parts of Harry's many, many years on Earth.

ikel89 informed me that Claire North is the same person who writes the Matthew Swift series she loves and explained that the series gives you a strong feeling of the London atmosphere. I can tell this author is quite skilled in evoking a sense of place, and just as well with a sense of time/age. Even though 80% books that I read fall into this category, I'm counting this one as "book without magical creatures" (it's so odd to me that this is a square, instead of WITH), since it's got a mystical/magical aspect to it but all creatures are un-magical and realistic.

Finally, I just finished reading Wonder by R.J. Palacio, since I felt it was time for something quick and had heard good things about it. This counts as "heavily featuring kids" as all of perspectives are either fifth graders or high school students, with the main character a fifth grader. It also counts as "character with a physical disability" as Auggie suffers from hearing loss in addition to craniofacial abnormalities. I do feel that this is very much a kids' book, but I think it's a well-done kids' book. Based on my experience tutoring 4th/5th grade students, I feel like the author did an excellent job portraying the voice of this age group and the types of things kids care about. I also really like how she illustrated that Auggie's difficulties are not just his own (or his parents') - his sister, his friends, and others all share perspectives in the book and all struggle based on their association with Auggie, even when they mean so, so well. What I also really like is how the perspective of each person shows they each feel ashamed of and/or different about something in a similar manner to what Auggie feels about his face (like Jack Will and his family's money issues) - it seems like a good way to illustrate to kids that there's no one who lives a problem-free life, that everybody has insecurities. The ending seemed inevitable based on the tone of the story, but it seemed too neat to me, especially once I got to the part *after* the ending, with the pieces of wisdom from each student in the class. Overall, it was an enjoyable read, though, and it made me consider what my role would be as a teacher if a student with this type of issue were to end up in my class at some point in time.

Here's hoping I can get a good few more books in before the year is over.

Last week of my weekly polling business. (Though it's been fun so who knows? Perhaps these shall reappear sometime when my schedule allows and questions come to mind.) Figured it was best to do a big finish with a big poll:

ETA: Two of the choices on the first question ended up not showing up completely due to quotation marks. To clarify, the paperweight and candy dish both say stuff about how teachers are important and make a difference and all that usual jazz./ETA

Thanks for the indulgence and happy August! Hope everyone is doing okay in the summer heat (or enjoying not being in it, depending on where you are).

This week's topic is the current year.

Thanks for responding! Hope everybody only has good things coming their way for the second half of the year.

The fifth week of polling has arrived and it's back to random questions for this one:

Thanks, as usual, for taking part!

Still super busy, but a poll commitment > most other things!

Thank you, as always, for indulging this nonsense!
Collapse